Tranny Box Has A Special Deal For Readers Of British Tgirls Blog!

British Tgirl Kim In Corset And Heels Shows Off Her Toys! 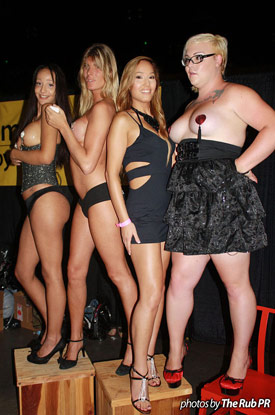 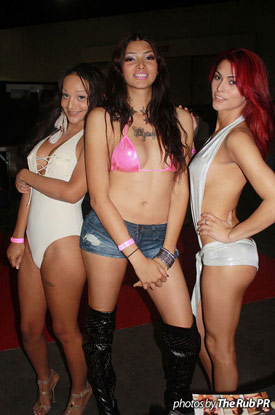 A few posts ago we helped make the announcement that Shemale Yum was hosting a booth at Adultcon. Well, the event has come and gone but it sounds like the booth was a tremendous success and we’d like to congratulate all the lovely ladies who showed up to help promote the genre! From the Tgirls.com Blog post:

Grooby Productions made history with their Shemale Yum booth at Adultcon in Los Angeles last weekend. This was the first time t-girls have exhibited at the tradeshow and it was a huge success. Domino Presley, Morgan Bailey, Amy Daly, Khloe Hart, Michelle Austin, Sunshyne Monroe, Jenna Rachels, Britney Markham and Angelina Torres worked the booth and charmed the crowd by go-go dancing and talking to all the attendees who visited their booth. The crowds couldn’t get enough of Morgan Bailey and Domino Presley—the girls were literally mobbed at and away from the booth. Additionally, they educated the public on the shemale community, which led to curiosity and tons of photos and DVDs sold.

“I know the event was a definitely success,” says Owner, Steven Grooby. “The girls educated the public about shemales and potentially our sites will reach a whole new audience. We handed out company postcards and virtually none were left. Plus, the girls were photographed with a vast array of fans, including couples and women. Be on the lookout for Grooby Productions to be attending more tradeshows in the future.”